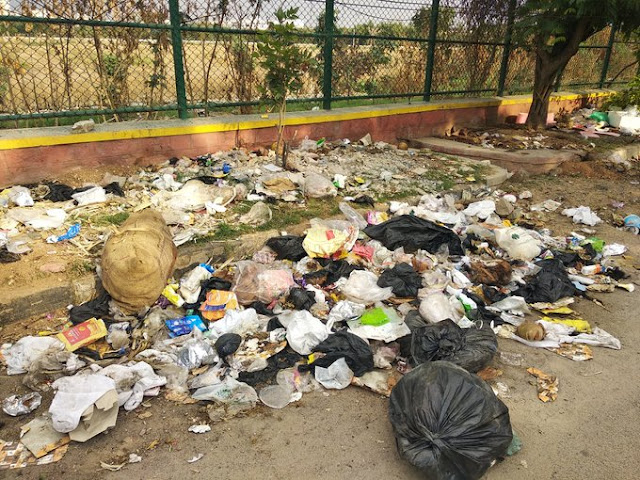 Ask any Bengalurean what are the 5 most serious issues the city is facing, there will be neck to neck competition between Garbage and Traffic to take the first spot, and eventually Garbage will win by a whisker! Such is the brutal impact of Garbage on the minds and eyes of the people of India’s Silicon Valley!

City that boasts of ISRO, HAL, BEL and thousands of IT & BT companies that are making huge technological advancements, are reaching the skies and even the outer space is reeling under the forever increasing Garbage mess!

Visuals across the city are not welcoming, heaps of garbage lying on road sides, in drains, in lake beds, in empty land/plots, under the flyovers, near slums, near schools are indeed common and the almost accepted norms. Added to the garbage is the construction and demolition (C&D) waste which is one of the biggest contributors for chronic Air Pollution in the city. All this painfully paints a very grim and Dirty Picture of Bengaluru, and mocks at the city’s inability to treat its garbage despite being a global city with many achievements to its name.

Bengaluru city has the most vibrant Civil Society, Activists, NGOs and Corporate participation, it will not be an exaggeration to say that irrespective of who is in power collaborative approach of the BBMP and State Govt with Citizens and NGOs has always been there. Given all this, why is such a vibrant city crumbling under the constantly increasing garbage crisis is a question worth seeking answers for.

No one can deny the challenges in managing and treating Municipal Solid Waste (MSW) and C&D Waste, but technically speaking Bengaluru never planned for its growth nor for its garbage. For years waste was transported to dumping yards in the outskirts of the city to keep the city clean, when villagers revolted against the badly planned dumping yards and the environmental damage it was causing, BBMP hurried with random plans to address the garbage issue. But by then the infamous garbage mafia that has been thriving under the garb of garbage transport fully supported by elected representatives cutting across party lines had made firm inroads into the garbage contracts.

High Court and NGT orders have not stopped most of the Bengaluru garbage reaching landfills, nor there is 100% Segregation, nor Bengaluru Bruhat Mahanagara Palike (BBMP) can claim 100% compliance of garbage tenders. Tender norms are diluted as the stronghold of the mafia does not allow fresh bidders for garbage contracts, and each time BBMP is muzzled and forced to go for ad-hoc contracts in most of the constituencies and wards.

On one hand there are massive awareness campaigns on Waste Segregation, Composting, Dry Waste Collection Centers (DWCC), Plastic Ban, Black-Spot fixing taken up by BBMP along with Citizens and NGOs, on other hand most of the garbage reaches the landfills, and yet there are heaps of uncleared garbage across the city! The missing piece between the desired result and the current status is the flawed and broken collection system.

ACT i.e. Awareness, Collection, Treatment are the three critical pieces of a comprehensive MSW management process, and a missing piece only means breakdown in the entire process, which BBMP is either not willing to accept or is unable to fix.

Today, door-to-door waste collection is not only uneven, its unjustified, its class driven and composition driven. With three vendor system, one for Bulk Generators, one for Commercial and one for Households, what falls between these three vendors are thousands of small shops, canteens, PGs, vegetable shops, street vendors etc. which are mostly operating in residential areas, thereby not considered or owned up by any of the three vendors.

Bengaluru is a 24/7 city, and our waste collection is extremely narrow, due to which people dump their garbage anywhere and everywhere as they leave to work just to avoid dogs tearing up the garbage cans in front of their homes

The class driven collection is rampant; revenue pockets, slums, poorer areas are the least priority for BBMP, residents there are allowed to dump waste on their own in few places, which BBMP terms it as Points, which is 100% mixed waste and gets cleared outside the collection system.

Value or composition of the waste is given more importance by the collection person; hence meat waste or vegetable waste are not collected in time, which in turn ends up on roadsides or drains during late night or early mornings.

Firstly, 100% Collection is the only way to assess the quantity & quality of waste generated each day and to keep the city clean without black-spots or points. This also ensures that there are drastic changes in the city and less visual eyesore.

Secondly, 100% Decentralization of MSW management can indeed make local ward administration more responsible and proactive, without them getting away by sending ward waste to other wards or villages. And its proven that smaller quantity of waste can be managed better, and volume game is never a solution for MSW management as there are no benefits of scale.

Thirdly, Technology intervention has to be explored to the fullest, when technology is solving so many problems, it’s impossible to fathom why technology interventions are not considered to address the MSW management process. Waste processing has to have multiple solutions based on the composition of waste, and technology plays an important role in creating synergy between all pieces of ACT!

BBMP is wasting a lot of public money on primitive ideas like garbage marshals making it more person dependent and not system driven. Hence, the first logical step to address the Dirty Picture of Bengaluru garbage begins with Collection, Collection, Collection. Acknowledging the actual quantity & quality of waste generated by the city can lead to more focused solutions and a better management of MSW.

Published in Deccan Herald and in The News Minute 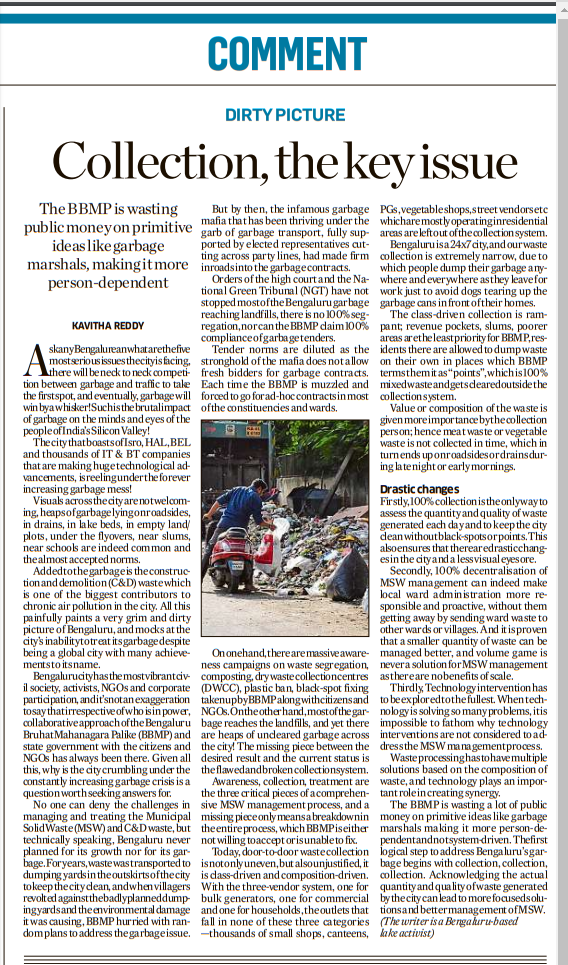