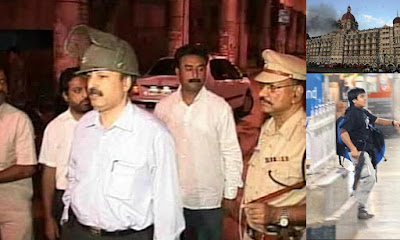 Great city of Mumbai lived through the night of terror; all of us know that Mumbai will be back to normal even before the news channels find other BREAKING NEWS. But why should we always expect the city to bounce back terror after terror?
Over 120 killed, 330 injured, assets worth crores damaged, crores of revenue lost, terror stuck citizens, this is what Mumbai has been for the last 25 hours, bring the city to a standstill.
14 Policemen 2 Army jawans laid down their lives fighting militants, the city came to a stand till with the most prominent landmarks under siege. The ATS chief who has been blamed by the BJP & Co for the last few weeks over the Malegaon investigations, lead his team from the front and took 3 bullets straight on his chest. Do the BJP still want to question his integrity? It's sad that people like him who wanted to make a difference had to lay down their lives fighting for the rest of 1 billion people.
It's disgusting that not even a single politician made an effort to visit the place of horror. I wish these places had the kin of a politician, just getting killed by terrorists, then they would have reacted I guess. Innocent people are being targeted; I wish it was not the common people, not the brave forces but the politicians who were targeted for once. They would then know what is the result of their disgusting politics over religion and power. Our politicians are so thick skinned and petty minded that they would ONLY know what it is to live in terror if they are held hostage.
The police force moved-in with no proper ammunition and ill-equipped to fight highly armed terrorist, the Prime Minister of the country says on TV, that the police should be equipped better and its time for police reforms, is that not common sense Mr PM? Its been due for the last 20 years Mr PM?? Or is it that you woke-up now?

The Army marched in, and the people of Mumbai stood up to cheer them, it was an assurance for the terror stuck citizens that they will be safe now. But what have we done for the Armed forces? The 6th pay commission is still to be finalized? There has been no betterment for lives or conditions for soldiers braving it out in the most difficult terrains in the name of DUTY.
Maj Gen Hooda came in with his men, they did not march thinking about their pay scale or their lives; they came on duty to serve the country, they came to kill the terrorists, and prepared to lay down their lives if required. They did not go on a strike like PSU employees or State government employees or Bank employees or Teachers, they did not refuse to work if they did not get the much needed and long-overdue pay hike. We should be ashamed as a country that we treat our brave hearts with absolutely NO dignity.
It's time we woke up, see what the brave hearts of this country are going through. It's easy to blame them when things go wrong, but how much of freedom do these brave hearts have to implement, to act and to achieve results. How many more officers will we lose in this petty politics? It's time leaders LEAD from the front and that is what LEAD means, in case our politicians do not know the meaning of the word “LEAD”.
My heart goes out to those brave men; they fought for all of us. Nothing at all can replace the loss to their families or the police force, but I know that they would fight once again with the same determination if they were alive.
Taj Hotel is not just any other landmark or just a 5 star hotel, it's a monument that was built by Jamshedji N Tata when he was refused an entry in a Hotel during the British rule. It's a symbol of determination, protest against discrimination and voice against the British rule.
May be its time to refuse to vote and register a protest vote, making it loud and clear that we will not elect anyone till they clean up their act. It's time to confront the so-called leaders of this country on our terms and refuse to accept them as leaders any more. We have a choice to speak out and make our voice heard and our blogs read. The media should black-out all politicians on both print and electronic media, running a protest campaign like the Indian Express running blank papers during emergency, and bring the politicians down on their knees.
We are a nation of great tolerance; we have tolerated our politicians for too long. It's time we declare our independence from the politicians, the atrocities and the polarization they have put us through, with no sight of any reforms or constructive action.