No Amrit Kaal for India’s Daughters! 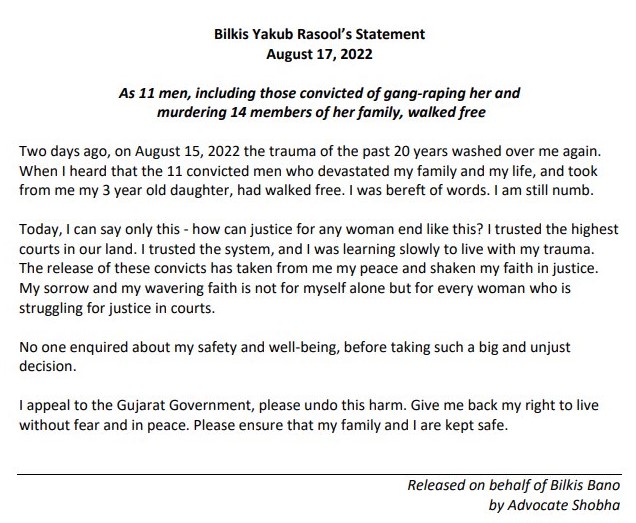 Addressing the Nation from the ramparts of Red Fort on the occasion Independence Day Prime Minister Modi said, India has entered the ‘Amrit Kaal’ and we should all work towards Viksit (developed) Bharat. In his speech he called for a change of mentality towards women, Pride of Nari Shakti, women’s role in fulfilling dreams of India, not to lower the dignity of women, and how he sees immense contribution by women in 25 years to come, much more than that in the 75-yr journey.

While the 15th August live telecast of PM Modi speech was watched by millions of Indians, 11 convicted Rapists of Bilkis Banu walked free out of Godhra Jail following Gujarat Government’s decision after a panel (10-member panel in which 5 were from BJP) approved their application for remission, notable on the day India completed 75 years as Independent Nation. 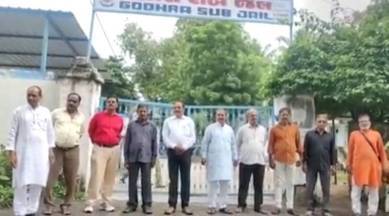 On March 03 2002 then 19 years old Bilkis Banu who was pregnant, her mother, three other women were brutally gang raped and repeatedly assaulted. Out of 17 family members 8 were found dead without heads, 6 missing, only Bilkis Banu, a man and 3 yrs old child survived the inhumane and horrific assault.

After 6 years of fight for justice against all the powers and struggles in January 2008, special court convicted all the 11 accused of rape a pregnant woman, murder of her family members. In May 2017, the Bombay High Court upheld the life imprisonment of 11 people in the gangrape case thereby giving justice to Bilkis Banu after her 15 years long brave legal battle against all odds. 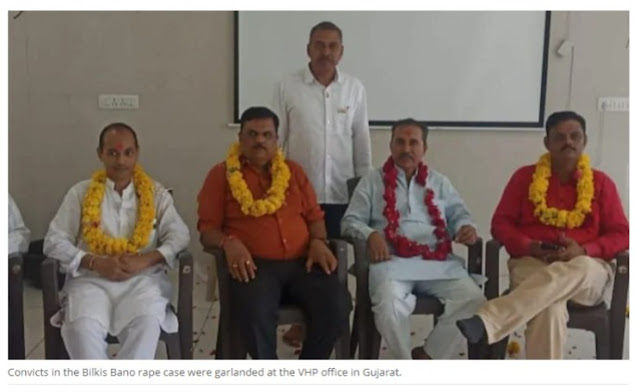 The act of release of these perpetrators of an inhuman and heinous crime on our Independence Day, followed by a grand welcome by the Hindutva groups, BJP MLA calling the rapists and murderers who do not deserve a place in any civilized society as ‘Sanskari Brahmins’ raises question on what really is the ‘Amrit Kaal’ that PM Modi referred to in his long speech.

Nation stood with one voice demanding rigorous punishment even hanging the rapist to death when Nirbhaya was brutally raped and thrown out of the bus in Delhi. India cheered ‘Instant Justice’ when rapists of Priyanka Reddy were shot dead by the Telangana Police, ironically release of 11 rapists of Bilkis Banu and murderers of her family members goes against the very anger India had expressed against the rapists of its daughters.

Bilkis Banu’s statement after the release of her rapists urging Gujarat Government to ‘undo the harm’, reflected in the sentiments and voices of millions of Mothers, Daughters, Rights Activists, Civil Societies across the country. Bilkis Banu’s fear & grief was evident when she said, “Today, I can say only this - how can justice for any woman end like this? I trusted the highest courts in our land. I trusted the system and I was learning slowly to live with my trauma.”

135 Ex-IAS Officers wrote to Chief Justice of India stating that release of the 11 rapists is a horrendous and erroneous decision by Gujarat Government, urging the Supreme Court to rectify the wrong decision. Based on PIL filed, the Supreme Court has served a notice to Gujarat Government seeking explanation on the release of the 11 rapists. And in the ‘Amrit Kaal’ India’s Daughters await to know if justice will be served based on Caste and Religion or based on Crime committed and Constitution.