“New Year at Malaysia”, I too wondered why!!! But since it was family & friends….

Genting, Kuala Lumpur (KL) & Langkwai in 7 days, was quite a tight schedule. As we arrived at Kuala Lumpur airport and left to Genting, a 2-hour drive to this mini Disney world across the main city gave a glimpse of the planning, infrastructure and maintenance one would expect in a key tourist destination of Asia. Malaysia got its independence in 1957 for the colonial rule, and makes me wonder how the country has emerged as one of the popular tourist destination globally. Thinking about it, Tourism, Oil, Rubber, Wood are most probably the largest or only contributor to Malaysia’s GDP. 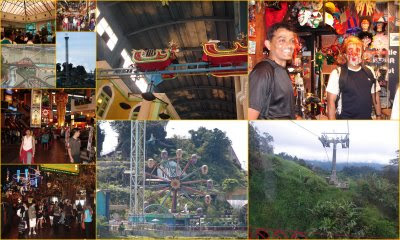 Just looking around all through the way, we reached the famous cable car point, asked the cab to reach the hotel, we waited over an hour with tons of people around to take a RM 5 ride to the main city of Genting, its basically an indoor center, with all types of fun rides, crazy magic shows, artificial snow ski center, casinos, hotels, food courts and shopping centers.

It was like being in a khumb mela, with people all over and noises that reeled my head for hours, 2 days was quite a thing to tolerate. With nothing else to do all we did was some 20 rounds of window shopping, some real shopping and cribbing over smelly food courts. It would be wrong to say I hated it, but would rather say did not like it much. Some of us were already tired and exhausted, it was showing all over our faces. The 2 kids who were with us had some fun, but I guess all the 9 of us were completely pooped out. The only memorable part was the India food we got to have for dinner on both the days.

I was quite eager to leave Genting, we did so on the 31st morning, right after breakfast. KL was not new to me; even though I had not explored it much in my earlier visits it looked too familiar. We took a monorail to another shopping mall and by then I was frustrated looking at the same stuff. I generally dislike shopping and by now I hated it. 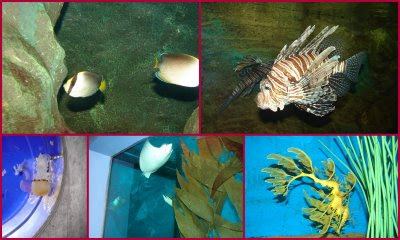 We just had enough time to get back to the hotel, take a shower and get ready for the “New Year” party, with limited choice we ended up in a 5 star hotel, where there was some ok music and a just ok crowd, I did not even realize when it all started and ended even without a drink. We were back in the hotel by 2 pm starving and tired, the hotel did not have a 24-hour room service so we ended up at “Maju Curry” a small restaurant that serves Indian food right behind our hotel. Food never tasted better than this, we ate all the food we could and cleaned it down with a nice filter coffee.
Full of 1st Jan and 1st half of 2nd Jan was all we were left with in KL and we had not visited a single place, its was a total piss off, I realized the difference between a tourist and a traveler. I am driven by curiosity and eagerness to see things, but ever ones objective was not the same, with all the resistance we started our day going to China Town, no clue why we were wasting our time there till about 12 noon. Time was running out and the tempers were running loose, with much drama and tension we hired a taxi for a day and went straight to the Batu caves, a hindu temple (lord Muruga) some 270 odd steps we are at the temple right in time for an abishikam, the caves are beautiful and quite unique in all its textures as its more of sand stone that has caved in over a long period of time. 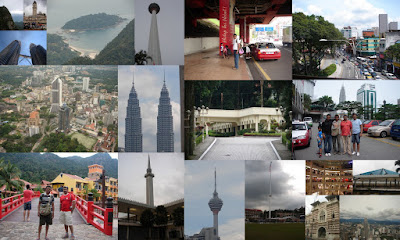 Row of street lights with bulbs popping out of the hibiscus shaped structures looked very creative, Malaysia’s national flower is hibiscus and the way they have used them in the streetlights around the park that covers the Bird park, Orchid park and the Butterfly park was very fascinating. Our next stop was the bird park, world’s largest aviary in captive, it was superbly maintained, large species of birds, many of which I did not even know, it was an eye opener indeed, the most popular among are the peacocks that are walking all over the place with no real fear of the people walking around. The hornbills that I only saw in Dandeli forest were also there, breath taking one was a large vulture whose wings were about 2.5 ft each.

We left the bird park after some souvenir shopping; on the way was the palace of the king of Malaysia, its really not visible from the main gate, but that did not deter us from taking pictures with the guards outside. On the list was the Chinese Buddhist temple, and anything about China or Buddhist is colorful. Even though it’s not an old temple, it had all the ingredients of the old look with bright colors, for ones it was peaceful and calm.

We also visited the Freedom square, the National mosque before hitting one more shopping mall adjacent to the Petronos towers. If there is one symbol that represents Malaysia it’s the Petronos Twin towers. I tried, as many shots I could to get the entire length of the tower on camera, was almost successful. With no more love left for any shopping I sipped a large glasses of juice till the rest of them returned to the meeting point. We returned to the hotel and crashed right after dinner.

2nd Jan was the last day in KL, so we left early to visit the National museum, which was a treat, I loved the ancient weapons section and the concept of arranging the sections based on the era, which ends with “Malaysia now”. The history of Malaysia is quite similar to that of India, with the colonial rule. The entire artifacts, weapons etc have a lot of Chinese influence but resembles a lot with India too. Malaysia is a multi-culture country, even though its predominantly muslim, every other section of the people can safely call it home and leave peacefully with varied religious beliefs. 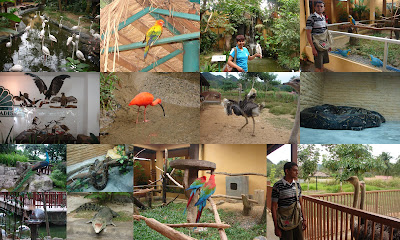 After lunch at an India restaurant, we rushed to KL towers, which houses some games and a snake sanctuary, its amazing to see such a place in the heart of the city, and was indeed a great experience to see very large size snakes. Coffee and we were off to the airport, flew to Langkawi after a long wait. It’s a 50-minute flight to the Island of Langkawi, we reached the hotel driving from one end to the other end of the island within 45 minutes. I dozed off with no much trouble, was indeed happy that the place shuts by 9.30 pm and was spared from yet another shopping spree.

Morning was bright we visited the wildlife park, where the prime attraction was feeding the Ostrich and holding a parrot, it sounds funny but it was really cool. After much deliberation we went up to the view point on the cable car, the highest elevation on a cable car in the world I guess, it raises 42 degrees, and gives a great view of the island, since its on a mountain, the green cover below is quite a treat. I was by now running out of space in my camera, had to delete not so good pics to accommodate the new ones.

Our next stop was the Crocodile farm, not much of an exciting place, just average, but the underwater world was the finest of all the places we visited, even though its not a large place the number of species it has was quite informative. I loved the pics of the fishes I took; I can say that they are the best pics of the trip. After spending some time on the beach we headed back to the hotel.

Our flight to KL was at 12 noon and from KL to Bangalore was at 9.55 pm, so we planed to visit to Formula 1 track, but Air Asia had different plans, our flight did not take-off till 5.45 pm. We reached KL domestic airport and rushed to the international section, after a long flight (given how tired we were) we reached home in the wee hours of 5th Jan.

Lesson for the next year: “Spend the New Year on a calm beach side”.