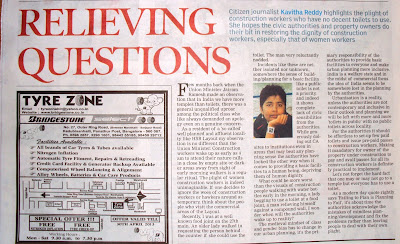 
Few months back when the Union Minister Jairam Ramesh made an observation that in India we have more temples than toilets, there was a general unqualified uproar among the political class who like always demanded an apology even on a genuine concern.

As a resident of a ‘so called’ well planned and affluent locality like HSR Layout my observation is no different than the Union Minister. Construction workers waking up as early as 4 am to attend their nature calls in a close by empty site or darker areas away from sight of early morning walker is a regular ritual, the plight of women construction workers is indeed unimaginable. If one decides to ignore the woes of construction workers or hawkers around as temporary, think about the people who visit the commercial areas of the Layout. Recently I was at a well know food joint on the 27th main, a older lady walked in requesting the person behind the counter if she could use the toilet, the man very reluctantly nodded.

Incidents like these are neither isolated nor unknown, somewhere the sense of building/planning for a basic facility like a public toilet is not a priority, and indeed it shows complete lack of civic sensibilities from the authorities. While generously doling out CA sites to institutions even in areas that may beat any planning sense the authorities have looked the other way when it comes to providing a basic facilities to a human being, depriving them of human dignity.

What could be more worst than the visuals of construction people walking with water bottles early in the morning, a lady begging to use a toilet at a food joint, a man relieving himself against a compound wall, I wonder when will the authorities wake up to reality?

The medieval mindset of class and gender bias has to change in our urban planning, it’s the primary responsibility of the authorities to provide basic facilities to everyone and make urban planning more inclusive. India is a welfare state and in the midst of commercial focus the idea of India seems to be somewhere lost in the planning by the authorities.

Urbanization is a reality, unless the authorities are not contemporary and inclusive in their outlook and planning we will be left with more and more ‘toilets in public’ with no public toilets across locality.

Let’s not forget the hard fact that one may or may not go to a temple but everyone has to use a toilet. As a modern day quote rightly says ‘Failing to Plan is Planning to Fail’, it’s about time the authorities acknowledge the mistakes of mindless planning/development and fix the problems rather than leaving people to deal with their own plight.