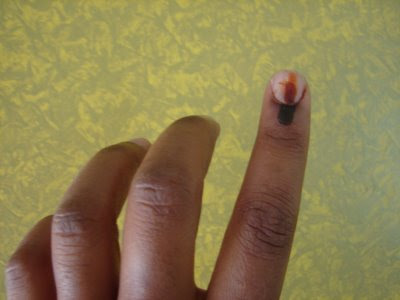 I voted today, for a party that can give a safe, secular, strong and stable government. For me voting is not a right, it’s a responsibility, a responsibility which entitles me to hold our politicians accountable. Even though I had to go in search of the booth due to the recent delimitation, it did not deter my determination to deliver my duty as a responsible citizen of this country.


As a kid I grew up among people who were in public life, it will not be an exaggeration if I say that, when I learnt alphabet, “B” was for ballot box. I cherish the first hand experience of campaigns, elections, vote share, voting patterns, counting and post-election evaluation. I learnt that, which booth, which panchyat, which hobli, which taluk, which assembly segment did not vote in favor of a candidate is as important as celebrating winning.

This elections is rather very important, I believe that the government that comes to power will define the road map of our country for the next 30 years. This is an opportunity of a life time, a time when India can change the course of the economic recession, a time when India can play the role of a super power and a key nation in addressing issues related to terrorism globally.

This election may even bring up the debate on the role of regional parties, small parties and independents in national politics. I tend to agree with Dr Manmohan Singh, that the independent candidates are the spoilers for consolidation of secular votes.

Logically, what can an independent MP do at a national level? They have to align with some party or the other, what would be their contribution on a national policy? How will they make an impact on economic policies, foreign policy or any other key issue that is related to the larger vision of the nation? One may be a good person and can spend his/her funds allocated on developmental work of the constituency in an appropriate way, is that all we want from an MP? What if the independent voted by us supports a party that may not be of our choice?

ay be the independents should be banned from contesting at least parliament election, yes it’s important to have good people in the government, but independents are no solution to that. May be if they join the national and regional parties they can clean up the parties in the process, rather than being spectator and giving external view.

I look at the parliament elections not just on basis of electricity, water or any local issues; I want a government that’s capable of:

Elections are our belief in democratic process, and that we have the ability and the choice to choose our next government. In fact, I decided not to watch IPL when the arrogant Lailt Modi made a statement that he cannot postpone IPL for election, he is indeed setting a bad example by taking the cricketers to South Africa and keeping them away from the democratic process. Well I want to tell Mr Modi that he has lost his right to ask for anything from the government of India!! Shame on such people, my house keeper took her entire family to her village for the big voting day, she knows her responsibility better than most of the so called “Urban, elite, educated class”.

I do hope that every Indian who is eligible to votes and bring a strong government at the center.