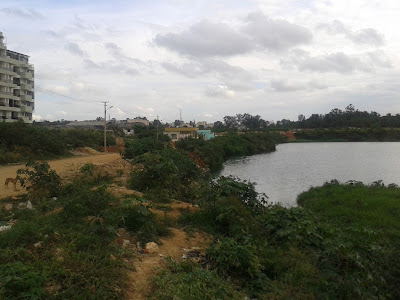 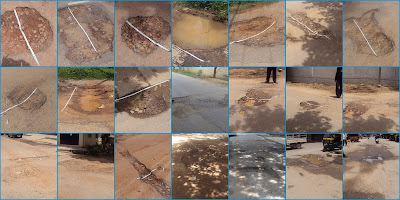 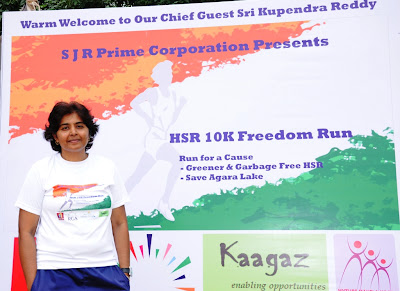 Signing the National Anthem with great pride at 6.40 am in the morning and watching the Flag-off of the 1st edition of the HSR 10K Freedom Run took away all my tiredness. Organizing an event where over 315 participants ran 10K and 5K Run was fun and equally challenging.

Local politics played as the event day approached, the initially planned route was changed as two things happened one the BBMP did not complete the asphalting work on 27th main and HSR Club refused to permit the usage of their parking areas and start and finish point due to political pressure. Mr Coroprator (even though his wife is the elected corporator he the corporator for all practical purposes) who is the Secretary of HSR Club forgot that I had invited his wife to inaugurate a Women’s Day event without any political prejudices and refused permission on some trivial grounds, even though the run had no political affiliation what so ever. I guess it’s the inferiority complex that played on his mind, bet the HSR Club members would not be against a landmark event such as the HSR 10K Freedom Run organized by an NGO Kaagaz Foundation.

Someone like me never let the political pressures to takeover my goal, it only made me more than determined to make it loud and clear to such low minded detractors that ‘where there is a will there is a way’, and nothing can deter an honest effort.

The HSR 10K Freedom Run witnessed an enthusiastic participation by both runners and the residents who came to cheer the runners at the start point and where there till the last runner touched the finish line. The Awards ceremony went off smoothly, the runners disbursed after having breakfast and collecting their certificates.

If waking-up at 2 am to ensure all the arrangements were made for the run was not enough at 9 am I realized that my day just got longer and had to rush to the Blood Donation Camp organized by my Mother’s Organization Mythri Mahila Koota. With a rushed hardly enough breakfast and no good sleep I was the 2nd one in the line to donate blood. Blood donation for me is the best form of social service and Independence Day is the best occasion to show your fellow Indians that you are there in their hour of need.

Independence Day, Republic Day, Kannada Rajyotsava, Gandhi Jayanti should not be symbolic celebration, it should indeed be the day when every Indian does something different, something to express our gratitude to our great nation by helping its people or spreading awareness or fighting for a cause.

Life is unpredictable and I always believed that our busy life should not keep us away from our intent. Many times I meet people of my age and younger to me who want to contribute time for a social cause or do something that is closer to their heart but never can, because they or either making career or fighting ill-health.