Unemployment Crisis – ‘’Any Job is better than No Job’’! 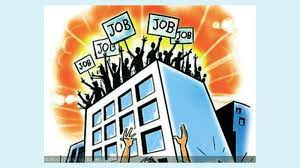 Decades ago, when relaxation was proposed for Temporary Workforce in India to enable fixed term Employment the Communist backed unions sloganeered ‘No Job is better than Temporary Job’.

Plummeting GDP for the last 6 years, initially with DeMo followed by a badly implemented GST the economy was left for a free fall, COVID19 pandemic added to the disruption of already fragile economy, and the fall out of this is the fast-shrinking jobs, where unemployed are saying 'Any Job is Better than No Job’.

One of the fastest and largest employment generation industry, construction and infrastructure is not even close to the recovery path, manufacturing sectors slipping into contraction for months showed rays of recovery only from July, but with not much increase in employment.

The woes of a fragile economy, the hangover of mere financial package announcements and the exit of Ford, GM and Harley Davidson from India leaves thousands of employee’s future hanging in balance and so is the fate of hundreds of OEMs and ancillary units who are the suppliers for these Auto giants.

As unemployment rates touched double digit figures, first five months of 2021 saw 2.5 crore of the workforce losing jobs, of which 1.72 crores are daily wage earners, 32 lac salaried persons losing jobs mostly in Urban areas reflect that path to recover or the “V” shaped growth the Government is propagating is just a vaporware.

As IT and IT Enabled Services organization are reaping the benefits of work from home the direct and indirect employment these industries created has shown a sharp decline. Cities like Bengaluru, NCR, Hyderabad and Chennai that boosted of the IT Industry and the employment generated due to the IT Industry is struggling now, as there is a sharp increase in Urban Poor.

Government’s efforts to relax Labours Laws and Compliance may not necessarily helping in adding employment numbers but rather become a source to exploit Labours who are already in distress.

MSMEs with over 64 million units is the backbone of Indian economy, providing employment for over 10 crore people and contributing 30% to the GDP. With the current crisis MSMEs without financial stimulus is racing against time, over 41% of the MSMEs are in the verge of complete shut down and scale down of employees is a reality in most units.

The ground reality of the economy only reflects that employment generation will not be an immediate priority for employers. One of the biggest lesson of India’s economic reforms is that growth is a necessary but not sufficient condition for poverty reduction, and with shrinking Jobs people falling into below poverty line is on a rise.

The only Job enrollments that has doubled in the last 18 months is that of MGNREGA, as migrant workers move back to hometowns from cities, they are able to stay hunger free by the work provided under MGNREGA, which was once mocked by the current regime in the Parliament.

Today with COVID19, which is an additional burden on the economy most Indians are unable to escape their financial, geographic or social opening balance. Unfortunately, there is no sight of Reforms or Policy changes that can make labour markets, economy and country more inclusive, nor there is effort to create equality of opportunity and help people escape their losing tickets in the ovarian lottery. Hence the youth of the country will continue to suffer from unemployment crisis for a long time.