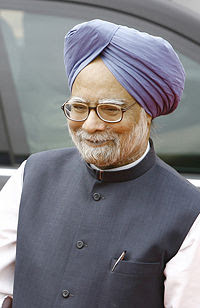 3rd July would be celebrated in India as "Nuclear Independence day", the day Dr Manmohan Singh stood tall and strong against all his detractors and announced that he will go ahead with the “Nuclear deal”.


It is going down in history as a day India put its national interest ahead of any political agendas, a day when the soft spoken Prime minister who was always taunted as the puppet in the hands of Mrs Sonia Gandhi made it loud and clear that he will go ahead with the deal, and nothing can stop his commitment to the deal.


Many of Dr Singh’s party colleagues were not in favor of the deal, as any uncertainty on the stability of the government would mean early elections, and no party is ready to face the people yet again. The PM’s determination, greater vision and the belief that the time has come to do the right thing for India not just won him the praises from the media, backing of the scientists and the economists but even parties like SP announced its willingness to stand by the government if the Left party pulls out its support from the coalition.

The Nuclear deal is seen and accepted as the only long-term solution to our growing energy crisis . India is a country that is growing younger, which would mean that there is a high economic growth, an alternate energy source will fuel the economic growth that India is going to see in the next 10-30 years. One must also not ignore the fact that for a growing economy a cleaner energy would mean a lesser strain on the already warming earth.

The IAEA document is finally out in public, analyst agree that the agreement is in favor of India and it does not deter India’s weapon program in anyway. India had already declared 14 of its 22 reactor as “civilian”.

With the nuclear deal India will have access not just to the technology but also the supplier market through the NSG. Clean energy requirement to India is critical, and any inhibition that deal may curtail India's weapons program is just an imagination.

Some of the political parties pulled a fast one, stating that N-deal is anti-Muslim, where did this come from? If it’s good for India, it is good for any one who is an Indian.

As a superpower in the making India has to join hands with larger powers, its time we start thinking and believing that we are going to be a superpower. With the projected economic growth, the world may love us or hate us but they really cannot ignore us.


Dr Singh did a Nehru; going back to history Nehru’s vision of a modern India has been perfectly crafted. Two countries India & Pakistan which are of similar cultural and social background got their independence the same day or should we say, Pakistan decided to call midnight as end of the day and India called it the beginning of a new day. Today India is spoken in the same breathe as China or America and Pakistan is either compared with an Afghanistan or Bangladesh. I guess such is the power of great visionary, and Dr Singh will be remembered along with Nehru for years to come, truly christening him “Singh is King”.

India is looking at 22nd July 2008 as the day when we strengthen our belief as a country to go that extra mile to do what is GOOD for INDIA.