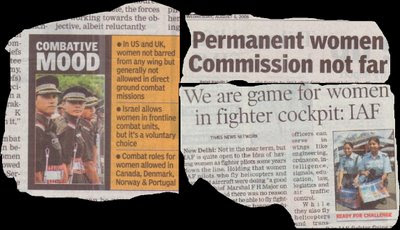 I read these news clippings that appeared back-to-back in a national daily for over 10 times, at last!!! I can see this happening in my lifetime; it made me happy but was angry at the same time.

The source of my anger was personal, for woman like me who ‘Dared to Dream’ of a combat career in the Armed forces 17 years ago, it just stayed as a dream. I was very proud when many of my college seniors joined the 1st batch of women pilots and the 1st batch of women officers in the army. I clenched on to the hope that, when my turn comes I will have a choice of being a Fighter Pilot or join the Infantry.

At 21, like many I wanted to change India, and tell the world that women in India are ready for the next career. With fire in my belly, determination and hard work, I gave my best, still did not get what I truly believed ‘I deserved’, I was not prepared to take ceremonial role in the Armed forces, thus ending my dream of wearing the uniform.

In the last 17 years we have had four women chief ministers in the four biggest states, we have over 75 (recall names) women CEO, missile team at DRDO has women scientists and women joining the Civil Services had only doubled. What more should women prove to be accepted as equals in the Armed forces.

Yes, I do agree that whenever there has been a sexual harassment case lodged by a woman officer, it has got negative publicity for the forces and so called women groups get demanding for a better treatment or differential treatment, for god sake!!..they are not the aspirants of a career in Armed forces. These some time minor issues should not deter the Armed forces from opening up more demanding opportunities for women. I do believe that women who opt for a combat oriented role want to be treated equally and not differently, it will be only fair to give them the opportunity they have been deprived of and prepare them for the same.

A model claims, she was asked to sleep with a producer for a role in a movie; a male IPS officer made an inappropriate gesture at a female IAS officer, a male teacher molested his female student etc. There are many such incidences and situations where men take advantage of women and its not career specific, but it does not give anyone the right to tie a woman down or protect them by restricting, instead its an opportunity to prepare them to face it on their own and importantly with grit and dignity.

Times have changed; women are more self-aware and are more prepared than ever to live their dreams, and an acknowledgment to the changing times will only be appropriate if the ‘thought’ of the Armed forces, as said in the news papers becomes a reality.

Looking forward for the day, when India has its 1st woman fighter pilot and the 1st woman along the borders guarding the country.


When the dream of a ‘combat’ career shattered, every other career option just looked as a compromise, but I still ‘Dare to Dream’ many of im (possibles).
Jai Hind!!
-Kavitha Reddy
Newer Post Older Post Home