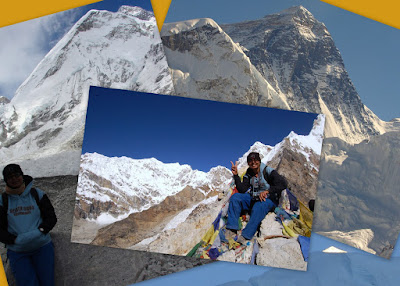 Someone asked me what do mountains mean to me?!! Hmm…taken by surprise..!!..I never thought about what mountains mean to me; since I can relate to them, never felt the need to define. But I know why I love them, Mountains are Arrogant, Cranky, Confident, Lonely, Magnificent, have their own mind, Rude, Beautiful, Protective, Moody, Tough, Elegant, NO one can mess with them, you simply go by what they dictate. My choice of people in life is no different ;)…many of them reading this will smile in agreement.

Six people one mission “to see Mt Everest form the closest distance”!!! 3 days at Katmandu domestic airport waiting to fly to Lukla in THE best the season says only one thing, “mountains have not made up their mind yet”. Many of the co-trekkers from different parts of the world had some how reached Lukla or decided to do other treks. 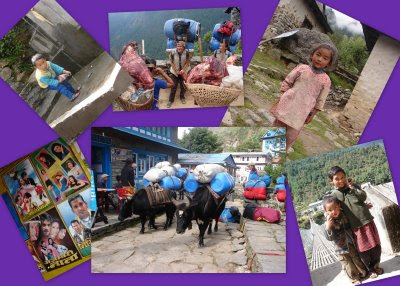 In the most desperate attempt on day 4, we landed up in the airport at 6 am for a 9 am flight. Looking at our sad faces but sheer determination, Agni airlines staff boarded us on a charter flight immediately, we made it to Lukla within 24 minutes.

With the enthusiasm and the thrill that we made it to Lukla, the 1st day trek to Monjo seemed like a cake walk, even thought we climbed up and down few hill and crossed over form one hill to another on the swinging bridges across Koshi, it was all picture time.

The beauty of Himalayas is that, till the tree line ends the entire landscape is lush green and covered with beds of flowers, and this trail was no different. Dudh Koshi that causes havoc in Bihar was gushing between the valleys, looked like it was in a hurry to hit Bihar once again. Like the name the water is white due to the speed at which it travels, maneuvering all the turns and twists between the hill range and on the rocks. All through the trek one thing that was running parallel with us was Koshi River and its tributaries. 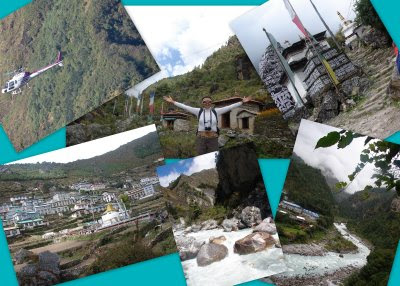 Namche was a big trek, as we gained an altitude of 3440 mts, and had an extra day stop over. Namche is like a supper market in the middle of the hills, you can buy any thing you want but at a slightly higher cost. It also gives the 1st view of Mt Everest & Lhotse and tempts you to go ahead.

At Namche we heard that one of the flights crash-landed at Lukla, all the 18 people onboard died. Lukla airstrip is scary, its just 150 mts long, elevates 15-20 degrees on landing, if the pilot does not land with great precisions it’s a nosedive. The flight was carrying a German family, few Canadians and Nepalese; I was lucky to be alive and breathing even in the thin air. 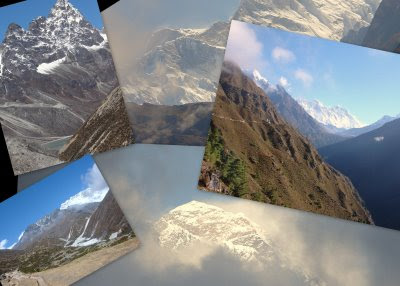 As we trekked to Deboche the visibility of Mt Everest was more and more clearer, the night in a tent, which Subbu and me opted for woke me up to Mt Everest. As I stretched out from the tent, I saw the fascinating hump of Mt Everest, tiny teardrops trickled, I could not have asked for more, it was truly “dream” come true.

The weather was getting colder and had dropped to 2-5 degrees; wind got colder, stronger and wilder making it difficult to breath. The terrain was rapidly changing, the stupas, which had the Buddha eyes all through the trails so far were getting replaced with memorials for people who died or just never found. It was an indication of what is it going to be next. The landscape was darker and less green; the trail was heaps of rocks and pebbles making the trek slower. We turned into the range that had Touche to our left, Amadablam to right and Mt Everest & Lhotse ahead, which eventually crossed over to Pumori, Mt Everest and Nuptse in the front.

As we crossed over to Lobuche, Shabna decided to return. Rest of us trekked to Gorakshep on the ridges alongside Khumbu Glacier, the moraine became visible. We entered the EBC route, and could see the pinnacles and the deadly Khumbu icefall jetting out, one could only wonder how the climbers would cross over to open route to Mt Everest peak. 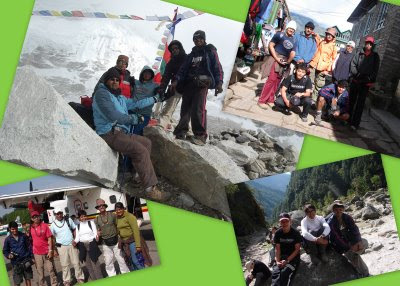 Moraine is an unforgiving terrain; ice below topped with debris can slide you down if you are careless. It’s exhausting; with wind blowing at a high speed and the temperature dropping, trekking after 2 pm in this terrain is a task. Many, rather most of them were returning from the ridge, but I was determined to make it to EBC by 2 pm, so was Subbu, but the rest were still not visible at that point.

Ah!!! Reaching EBC (5364 mts) was a reassurance that I still have a lot more left in me. I remembered Vishal as he would be here next year for his Mt Everest expedition, so left a message wising him good luck and safe return. The rest of group arrived, it was a perfect picture moment, I was very happy that all of us (expect Shabna) made it to EBC…..and could say loudly here after “been there done that”. 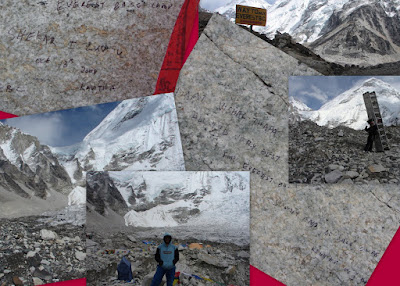 In the middle of the night I felt breathless, my lungs refused to take oxygen, I was not wiling to die in Gorakshep!! If it is, its when I attempt Kanchanjunga my 7th 8k’er ;)!! I realized that 3 layers of clothing lead to excess heat and it was choking me, I immediately got rid of a layer and started to breath easy.

After EBC the next mission was climbing Kala Pattar, it’s just a trek up, but at 5545 mts and the steepness it’s quite a climb, finally only Subbu and me decided to go. It took exactly 2 hours, loads of energy, not to let it go spirit to reach the top. Kala Pattar gives the best view of Mt Everest, and that all I wanted. Not sure what went into our heads, Subbu, Maila and me made it to Pheriche in 4 hours flat, next day the entire team was back in Namche and the following day at Lukla.

On return to Namche, Adarsh & Maila looked at me at the breakfast table and said “Didi, next time you should come only to climb Mt Everest, you are very tough”…..one compliment I will cherish for the rest of my life. After spending so much time with the mountains, my belief in destiny has become stronger than ever, and I know when the mountain calls nothing can stop me. So I am waiting for my DATE with Mt Everest.