End of 2011 India would have collected the data of the castes of its citizens; hot debate on caste based census was almost like a storm in a cup. Many of you who are reading this may not agree with the view but it’s time to call ‘spade a spade’. Sitting in the comforts of our living rooms and calling ourselves global citizens or being idealistic does not change the fact that the poverty in this country is linked to caste. If drunken driving is no reason to ban cars then the argument on caste census becoming a tool for minority or caste politics etc etc is trivial.

For sake of argument which country in the world does not ask your caste, which political party in this world does not address the vote bank? In the recent UK elections a person from Indian origin was given a ticket to contest from a constituency that had Asian majority. US can intellectually call it ethnic groups etc etc, it all leads to one single thing, ‘who were you born as’. Let's cut the bullshit of religion, caste, ethnic groups etc etc being irrelevant in the economic surge or political process.

If we accept that there is a problem then it’s easier to find a solution, hence let’s get the fact right, there is a pattern to poverty in India and that has to do with caste. 25 years of well run literacy program has still left us with 37% poverty (even though I disagree on the 37%, as the urban poor are different from rural poor). The ideological view of ‘literacy for all’ rhetoric has not changed the fact that the female feticide is the highest among the educated urban class, so leave alone it being ‘the plan’ for poverty reduction.

People from certain castes and certain religion have been left behind in the India growth story. If we have to address the 37% poverty and 35% illiteracy, then there is a genuine need to understand the social fabric of hungry India. The fear of politicians manipulating the vote bank or data leading to more reservation etc are petty issues compared to the larger need of creating a non-intimidating atmosphere, empowering every section of the society, inclusiveness in our growth process and finally not just creating opportunities but creating options to every single Indian.

As a country we are growing younger, which only mean we will have more ‘young and restless’, and large part of the younger population demographically are in this 37% population that is under poverty. If we do not identify and engage them rightly, as a nation we will be left with a lot on our plate to deal with. Today the only caste difference we want to recognize is the rich and the poor or the urban and rural, in this lopsided view we are missing the disease and are only treating its symptoms.

Our shining examples of people from the backward caste making it in life comes with the reality that they have worked harder than their counterparts from forward caste, and for some reason we seem to be very ok with them working harder. Did it ever occur to us that why should a person from a backward caste work harder than the one from the forward caste to be what he/she wants to be? We have type casted them as backdoor entries or reservation class for decades, laterally tearing into their self-esteem and the disregarding the right to opportunity.

Here are some facts to ponder, and if we still believe hungry India can be addressed without understanding the make of its population then we must be living in eternal denial. 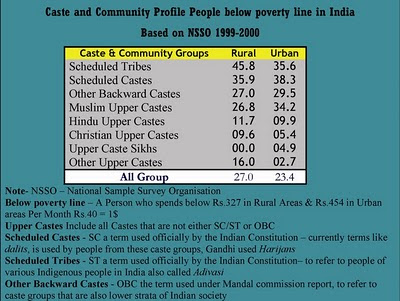 Recently during a discussion on caste census at an alumni meet, I was appalled to hear a remark that ‘caste census will create more Mayawaties’, what I am not able to understand is not just the attitude of the remark but selective targeting of a caste and equalizing quality with caste. A bad politician has no caste; UP was not better during the time of N D Tiwari or Kalyan Singh or Rajnath Singh or R P Gupta or Mulayam Singh Yadhav, each of them have played to the galleries but we still believe in linking quality to caste, which in a way only makes it clear that the caste is in our heads really.

The growth of a country is in its inclusiveness, in its ability to bring all sections of the society to the discussion table and to the drawing board, if reservation is the only means to address it so be it. It’s time we realized that a group of think tanks or economic big wigs cannot decide on what is good for every Indian; let’s give an opportunity to people across board to speak for themselves. Economic participation is directly linked to Social and Political empowerment & inclusion, and caste census is the only way to assess the position we are in and strategize how we can make India inclusive.

I to believe in a casteless system and my only caste is ‘being an Indian’, but one cannot ignore the ground reality or feel intellectual by harping of no caste system. The fact of the matter is that there is no equality without equality in Political, Economical and Social process, inclusive India needs a better understanding of its make.