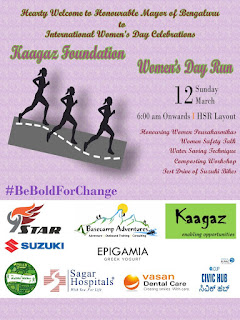 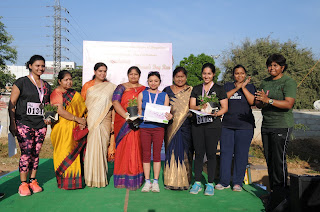 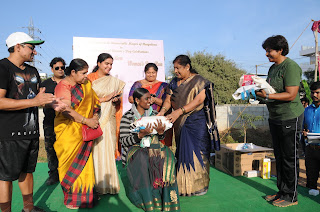 Kaagaz Foundation had organized the 1st edition of Women’s Day Run, sponsored by Nine Star Suzuki and Basecamp Adventures, objective of the run is to celebrate womanhood and encourage women to take up to running and develop a healthy habit of running.

Also other important aspects are to create awareness on Women Safety, Save Water, Waste Segregation & Composting, and it’s an environmental friendly run.

The 5kms run was flagged-off at 6.30 am on Sunday 12th March 2017 by Rao Ganesh Inspector HSR Layout Traffic Police; the event was well attended by 300 runners mostly women and awards ceremony was held at 7.30am.

Bengaluru Mayor graced the occasion and spoke about Women’s Day and the importance and women empowerment; she also spoke about waste segregation and citizen involvement for a better Bengaluru. Mayor also gave away prizes for the runners, the awards were sponsored by BPAC.

Jigna Modh the Organizer of the event and Director of Basecamp Adventures said, 'we are happy to see a large participation of women, and we hope to have more events exclusively for women'.

Honorable Mayor also signed the pledge board on the occasion of Women’s Day #BeBoldForChange pledge.

Women Pourakarmikas and HSR Traffic Police were also honored at the event and appreciating their commitment for a cleaner locality.

Trustee of Kaagaz Foundation Kavitha Reddy said 'we have been doing several events to encourage participation of citizens to raise awareness about fitness, environment, environment and citizen involvement to make our community and city better'.
Newer Post Older Post Home