Where are the Trees? After being christened as City of PSUs, Garden City, IT City finally Bengaluru 4.0 is now heading towards being renamed as the Polluted City.

Green history of Bengaluru shows that back in 1987 city had recorded 1500000 Trees, which was indeed the last official Tree census in Bengaluru, thanks to visionary Chief Minister R Gundu Rao’s ambitious Tree Plantation initiative in 1983 that we now enjoy the shade of full-grown Trees. Sethuram Gopalrao Neginhal, the then Deputy Conservator with a committed team and greater citizen participation sourced, planted and nurtured the saplings for over 5 years and later the project was handed over to City Corporation to take it forward.

Presence of strong citizen green groups and laws has not stopped the City Administration and State Govt to find ways to hoodwink all of it, and consistently bring down Trees in the name of metro, road widening, flyovers, ring roads, development, pavements, layouts etc., There is very little effort to increase the green cover and BBMP’s ambitious project of Tree census has been going on since 2019, its indeed a shame that an IT City is struggling even to count Trees for years.

As citizen movements and green activists of Bengaluru struggle to save the Tree cover from multiple infrastructure and development projects, the menace of unscientific chopping of Trees in the name of pruning, constant digging of pavements for installation of gas line, water line, OF cables have weakened/damaged the Trees from the roots, the green woes are never ending. 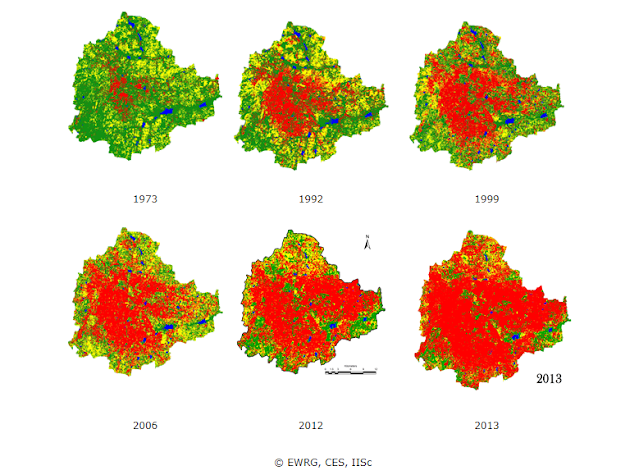 Drastic reduction in the green cover as the city expands is catastrophic, increase in air pollution and rise in temperature is taking the sheen away from Brand Bengaluru. Study by EWRG, CES, IISc study not only painted the red picture of Bengaluru but also detailed how the City Administration is unable to make course correction and ramp up its Tree Plantation program. Also, Green Peace South Asia analysis in 2020 declared Bengaluru as the third worst affected city in India due to Air pollution.

Accountability & Transparency in BBMP is a great challenge, and its inability or unwillingness to share the number of Trees Bengaluru lost since 2009 for development works, illegal cutting and natural loss, does not speak well for Bengaluru or its Administration.

The key factors responsible for the shrinking green cover are; Felling of Trees for infrastructure works, unscientific pruning of Trees, lack of consistent Tree plantation program, lack of Bio-diversity in the saplings planted by BBMP each year, dying Lakes and most importantly absence of an independent, strong and effective Tree conservation body in the Corporation limits.

City Administration has to reconsider its priorities, and if Bengaluru has to survive it needs: - 1. effective and well monitored Tree plantation program with citizen participation, 2. creating mini-forests or green zones Ward wise utilizing the vacant Government land, 3. policy to promote Tree plantation in campuses of institutions & corporates, 4. most importantly have a comprehensive Green Vision Policy for Bengaluru.

Let’s hope that State Government will respect the 74th amendment and not delay the elections to BBMP any further, and that citizens of Bengaluru will elect quality and competent corporators who can effectively make Bengaluru Greener and Better.