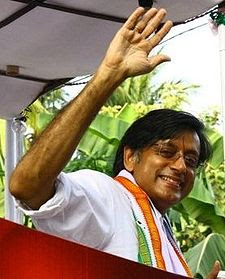 “Holy crap”….what can I say, appalled by MoS for External Affairs tweet. Mr Tharoor surely does not understand the meaning of “Leading by example”.

Narayanmurthy, Azim Premji and many other eminent personalities are admired for their simplicity; they are the richest guys, whey do they have to do what they do? It’s simply “Leading by example”.

The world knows that Mr Tharoor can afford to travel business class, stay in 7-star hotels and does not need tax payer’s money to do so. He may be used to lavish lifestyle, after all UN survives on funds and never accountable for the balance sheet, but he is in India now, were connecting to 1+ billon people will not happen on twitter but by leading from the front.

It’s not about austerity or hypocrisy or bla, bla, bla…its signal that one must see… there are thousands of officers & bureaucrats whose expenses add up to the exchequer and if the bosses lead from the front the rest will follow.

How ever trivial it sound/look the austerity drive is definitely a step in the right direction, and we need this austerity campaign to trickle down to every department in the government making it more accountable and responsible for tax payers money.

Mr Tharoor should never forget the fact that UPA came to power because of the ‘aam admi campaign’ and BJP got bombed by the ‘India shining campaign’.

I have been an admirer of Mr Tharoor and followed his writings, book, speeches and entry into politics. I believed that as a diplomat he can make a positive impact and drive the Foreign policy agenda better than anyone in India, but I must say that he has lost a fan.