Sub: Deletion of the Voters form the Voter List

At the outset, we take this opportunity to congratulate the Election Commission Karnataka for successfully conducting peaceful elections in the state.

As you are aware voting is a constitutional right given to every citizen of India who is 18 years and above, unfortunately we are placing some facts on record which has denied the very right that the constitution of India has provided.

In the recent Assembly election that was held on 5th May 2013, it was common sight of voters who had voted in the last elections came with the voter ID cards, were shocked when they were told that their names are not found in the official updated voter list. As political party representatives we had to face the angry voters who were denied the constitutional right.

We would like to bring to your notice that there has been a large scale random deletion of voter names from the voter list in Bommanahalli Assembly Constituency. We suspect vested forces operating in nexus with the relevant government functionaries in the wrongful deletion of the voter names and denying them the constitutional right to vote.

In this connection we are raising some serious concerns and question as below:

1.    What was basis on which voters names were deleted from the list that was published for 05-05-2013 polling?
2.    Who was the nodal authority who initiated and authorized the deletions of the voter names?
3.    Was the consent of the voters sort before deletion?
4.    Was there enough evidence established before the deletion of the voter names either through door-to-door visits or in form of declaration from such voters?

We demand a detailed response for the above mentioned question and further request you to conduct a full fledged enquiry into the malpractices that have occurred in the process of voter validation and registration in the Bommanahalli Assembly Constituency.

In the interest of the voters who have been denied the constitutional right of voting, we would request you to instruct the concerned authorities to swing into action without any delay and validate and incorporate the deleted names of the voters and grant them the right that the constitution of India has mandated.

Further, it was also observed that the responsibility of distribution of the voter ID’s that vests with the BBMP authorities, but the shocking fact that came to light during this election is that in Bommanahalli Assembly Constituency bulk voter ID’s of the newly registered voters were handed over to the ruling government representatives and other unauthorized individuals by the BBMP authorities who were actually responsible for the distribution of voter ID’s to the right individuals. Similar cases have come to light in other BBMP Wards of Bommanahalli Assembly Constituency, we would request an affirmative action against the person/s responsible for distribution of the voter ID’s

We truly believe that that the state election commission would take cognizance of all the above concerns raised and act upon without any prejudices and ensure justice to the voters who have been denied the constitutional right.

We have enclosed copies of some of the voter ID cards and voter ID numbers who were denied the constitutional right to vote.

Looking forward to hearing from you at the earliest.

Many Thanks,
Warm Regards
Kavitha Reddy

Below is the copy of the list of voters (family) who could not vote even though they have been residing in the same house for a long time and had voted in the previous elections in polling station 37 of Ward 174 Bommanahalli Assembly Constituency. 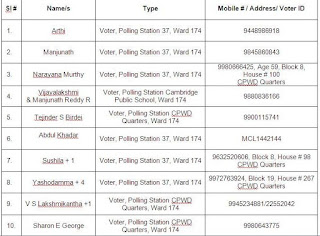 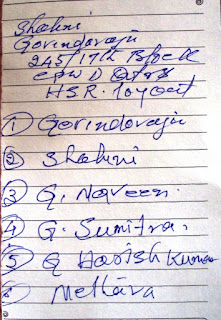 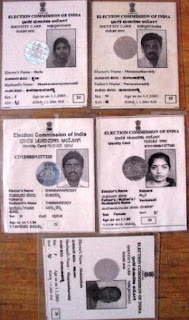 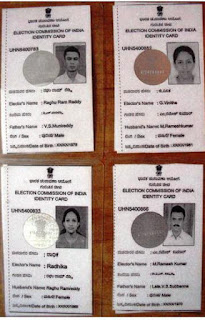