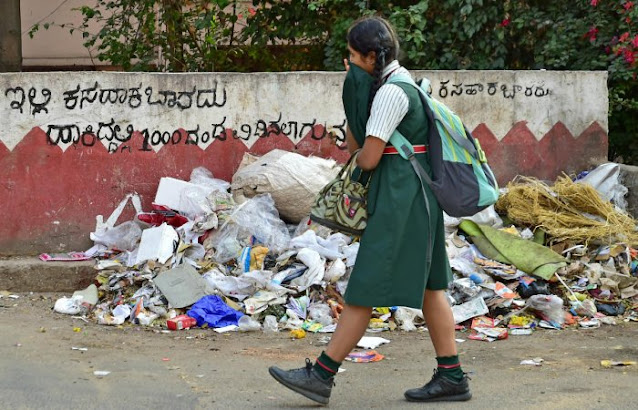 Silicon City and IT Capital of India it’s still grappling with basic issues and the most prominent of it is the Garbage crisis, makes you wonder if Bengaluru Bruhat Mahanagara Palike (BBMP) will still continue to be on Garbage experimentation mode.

Bengalureans are indeed frustrated with being the guinea pigs of BBMP Garbage experiments. Without a single Solid Waste Management (SWM) Expert on its SWM EC Panel, nor a single professional consultant who can be held accountable for the failures of the experiments, BBMP SWM saga is no different from the childhood story of Elephant and six visually challenged people.

BBMP’s latest “Surgical Strike” on Bengalureans is charging Garbage Collection Fee (GCF) for every house via the BESCOM Bill. BBMP is already collecting SWM cess in the Property Tax, Apartments and Commercial entities pay for vendors who collect their Garbage, Commercial entities all pay additional cost for Garbage collection. So, what is the need to charge more for a service which is anyhow not rendered properly? Will “Surgical Strike” of charging GCF end all the Garbage woes of Bengaluru?

BBMP cannot claim 100% collection, because we still see loads of Garbage on the streets, lanes, road sides, vacant sites, drains, footpaths and even Lake beds of Bengaluru. The “Collection Casteism” leaves may out of Garbage collection net, who thereby dump waste at their will. Street Vendor to CEO, Huts to Apartments all generate Waste, by not collecting from some sections which I call it as “Collection Casteism” BBMP has been doing injustice to Bengalureans.

When there was a huge Citizen support for slicing the Municipal Solid Waste (MSW) crisis by de-centralizing processing at Ward level, BBMP dragged its feet and wasted crores of Public money to make badly managed and stinking compost units like KCDC look good. These compost units are today not only becoming hazardous but are monuments of BBMP failed experiments.

Even as cities like Hyderabad and Vijawada are using the large and smaller Mechanical Sweepers, all the 17 odd large Mechanical Sweepers purchased by BBMP funded by the Taxpayers are either not used or rarely used and can be found stationed in some service roads, thereby adding problems of dust and uncleaned roads to Garbage woes.

100% Segregation is an ideal situation and indeed it should be the Aim, but BBMP is failing in its SWM Plans because it refuses to prepare for the worst and all the processes are set assuming that there will be 100% Segregation. This wrong assumption has become a stumbling block and stopping BBMP to implement multiple solutions to process MSW in a fully de-centralized manner.

1.2 crore Bengalureans are indeed customers of BBMP, but time and again BBMP has been only collecting Tax, Cess, Fee but has not shown any improvement in managing MSW. So, why should a customer pay more for a service that BBMP has been failing to provide time and again?

When BBMP is spending over Rs1000 crores per year on SWM which is appox Rs 7 per kg, what will the new fee do? Will it fund more BBMP SWM experiments and strengthen "Garbage Mafia"? Rs 7 per kg to collect/transport/process/dispose is probably the highest cost in comparison to any city and still Bengaluru is not Clean.

It is understood that BBMP is bankrupt of Ideas to increase Revenues, it has no Innovative or Collaborative way to increase revenues or even reduce costs. Everything in BBMP is about contractors, in an extremely high contractor dependent BBMP reducing costs means disturbing the apple cart that is used to a certain way of functioning, and any change could angry the “Contractor Mafia”.

In this stand-off of BBMP trying to loot its customers by forcing GCF, its time the customers call the BBMP Bluff and refuse to pay the new GCF and put BBMP on a trail and demand BBMP to prove its worth by deed.

For next 6 months let BBMP SWM:

Its high time BBMP pulls up its socks and works on Administrative Reforms, Financial Prudence and end the dominance of "Contractor Mafia & Garbage Mafia" before it burdens Bengalureans with more Taxes & Fees.

With the new BBMP Bill, 198 Wards and many Gram Panchayats will become part of Greater Bengaluru Mahanagara Palike with 243 Wards, if BBMP does not Clean-up its mess now there will be no time and money left to face the bigger challenges ahead.